The Edmund Burke Society is pleased to announce that its next conference will be held at Belmont Abbey College on November 17, 2018. Speakers include Dr. Wilfred McClay, G.T. and Libby Blankenship Chair in the History of Liberty at the University of Oklahoma, and Dr. Vigen Guroian, University of Virginia. Select texts will be circulated to attendees in advance for the panel discussion session. Students, Burke scholars, and the interested public are invited to attend. 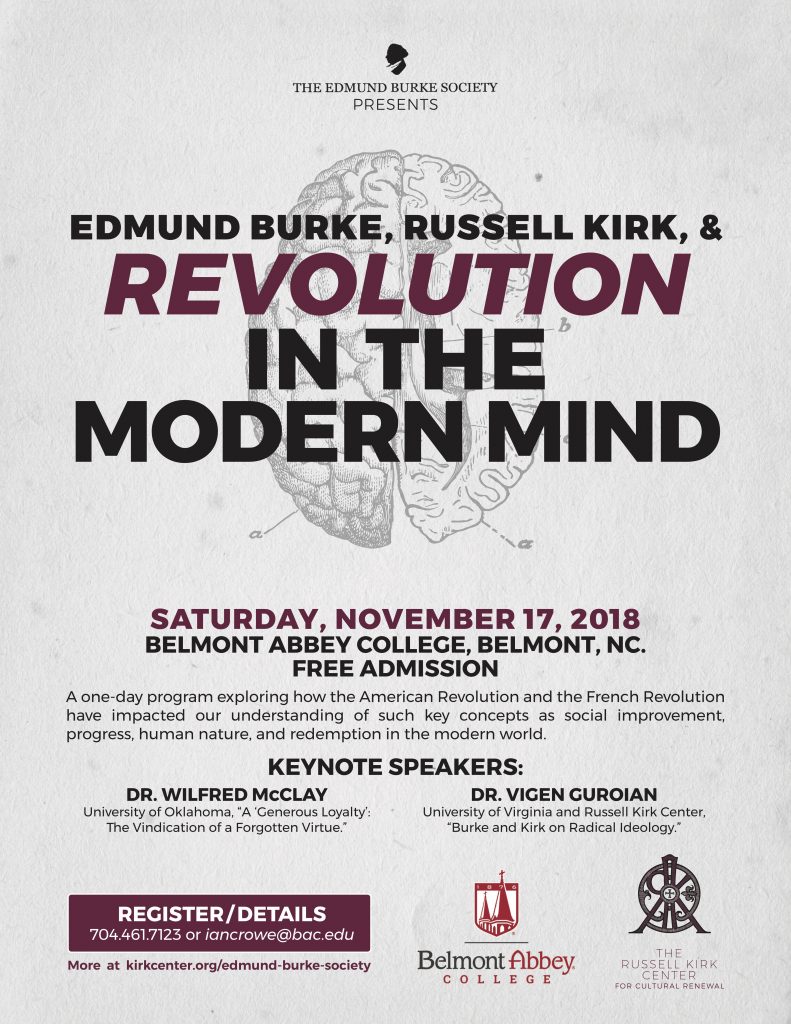 Edmund Burke (1730-97), Irish-born statesman and British parliamentarian, was both a sympathizer with the grievances of colonialist Patriots during the American Revolution and the most eloquent contemporary critic of the French Revolution. His position on each of these transformative events was both influenced by changing understanding of what “revolution” meant and itself helped to shape our modern-day approach to revolutionary thought. Russell Kirk (1918-94) was one of the twentieth century’s most profound disciples of Burke’s thought, upon which he built a forceful critique of the spread of ideology and secularization in modern society.

This conference will explore Russell Kirk’s conclusions and his debt to Edmund Burke in relation to the political and social environment today. Are we progressing toward an ever richer sense of justice and liberty, or must we be more vigilant than ever against becoming victims of the “terrible simplifiers” and ideologues in our midst?

Visit the Edmund Burke Society for the full conference program and to register for this free event.

Ian Crowe is director of the Edmund Burke Society of America. He is currently an associate professor of History at Belmont Abbey College and executive editor of the journal Studies in Burke and His Time.